Clad in rain gear and armed with backpacks full of water and snacks, we rose early to have as much daylight in Machu Picchu as possible. You can hike up the massive hill, but we opted for the bus to conserve our strength and save more time. It was the right move.

Winding up the curving road any sense of place faded away. We entered a thick layer of fog that made it hard to see more than a few feet ahead. By the time we maneuvered through the crowds and got through the gate into the park proper, a steady drizzle had started. We got our bearings, hiked up a few more steps, and found ourselves staring out at a sweeping, misty ruin. 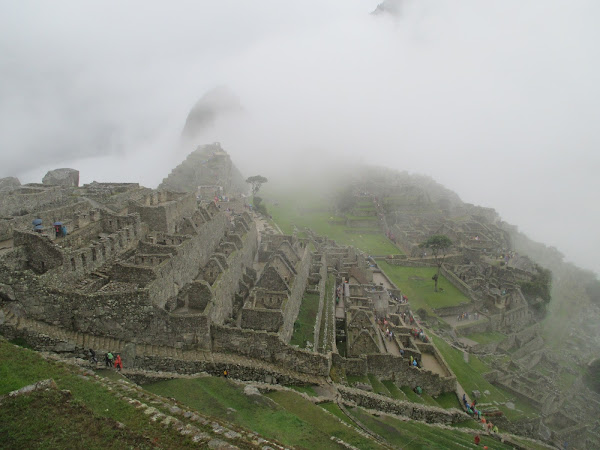 The fog made it hard to see the full extent of the site in morning. What we could see was lush and filled with places to explore.

We continued around the back away from the main area to get to the old Inca Bridge. The path was only wide enough for one person at a time, and exceedingly muddy. We were already soaked and dirty. 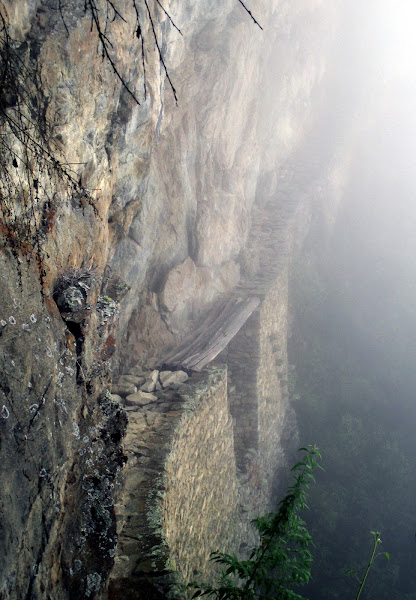 This is the Inca Bridge - this picture is taken about as close as the public is allowed to get. Although Machu Picchu is generally a pretty dangerous site given all the slippery edges, this was worse than usual: even a minor stumble here would spell certain doom. It would've been easy to defend against attackers though! 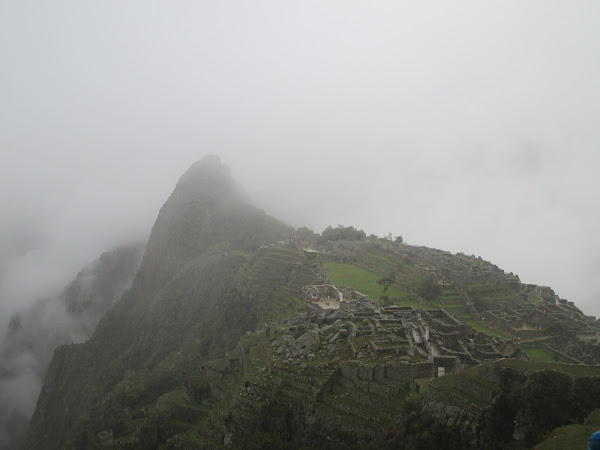 On the way back we got a view of the quarry on the back side of the mountain. The stone for construction was actually cut on site so the Inca didn't have to find a way to get it up the mountain.

We stopped by the Sun Gate, which is the end of the Inca Trail. But we didn't dally because we had an appointment to make. Given multiple recommendations from friends, we had paid extra to hike an adjacent peak called Wayna Picchu. Only 400 people are allowed to climb it per day, and everyone gets a preassigned time slot. This makes the tickets extremely limited considering about a million people visit Machu Picchu every year, so they sell out fast - we had to buy them six months in advance. 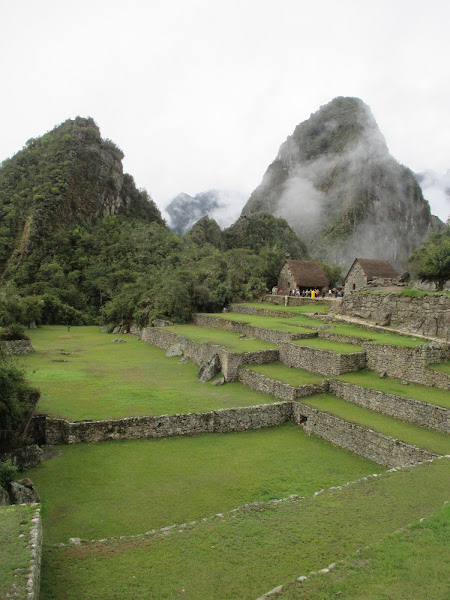 The fog cleared enough for us to see Wayna Picchu from below. It's the peak on the right here. And the perspective makes it seem much smaller in this picture than it actually is.

The hike up about 1,000 vertical feet to get to the top of Wayna Picchu was one of the most treacherous adventures I've had while traveling. The steps were slick and broken, making it hard to find solid footing. The only hand holds were the occasional cables bolted into the rock face. And of course the path was only wide enough for one person at a time, so there was a lot of waiting for groups to pass. I was able to handle it better than some simply because my height made it easier: individual steps were as much as 3 feet tall, so it really does become more of a climb than a hike for portions of the trek.

We got to the top area where the trail ended and a complex of buildings emerged. We weren't particularly impressed by anything there. But we pressed on and finished working our way up some steep steps to the reach the summit.

Miraculously, the fog cleared, and we understood.

The view was stunning. The whole of Machu Picchu was spread out below us, the centerpiece in an awe-inspiring landscape. 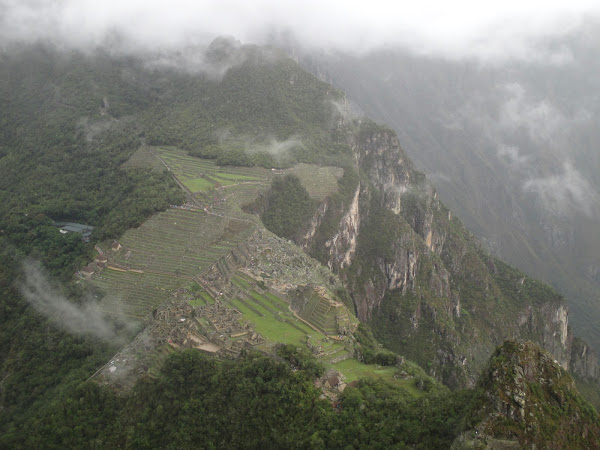 Machu Picchu as seen from the top of Wayna Picchu. We had come a long way. I definitely zoomed in to get this shot.

After we had our fill of the view we descended a different way through some caves to see the Temple of the Moon. Then we headed back to the main site to grab some lunch, while attempting to dry ourselves during the indoor break.

The rest of the day was filled simply exploring the ruins. We saw temples and meeting places and houses and granaries. I took hundreds of pictures. 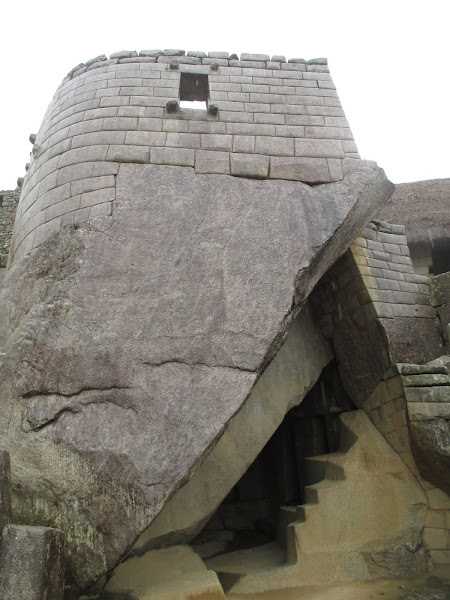 This is the Temple of the Sun. I think it's cool how the precision work is built right on top of the natural stone. 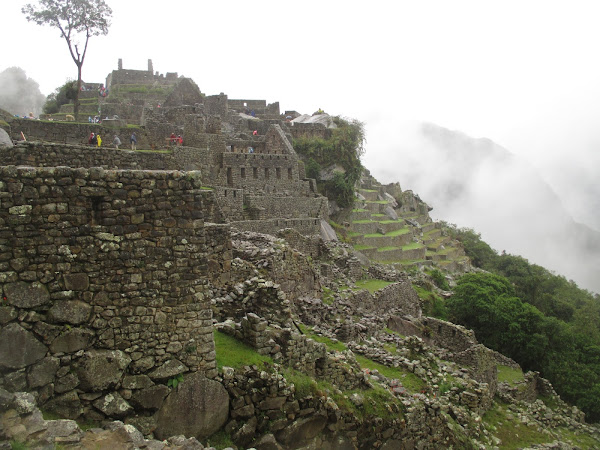 You can see some of the crumbling walls here, brought down by time and erosion. There was a lot marked for restoration work. 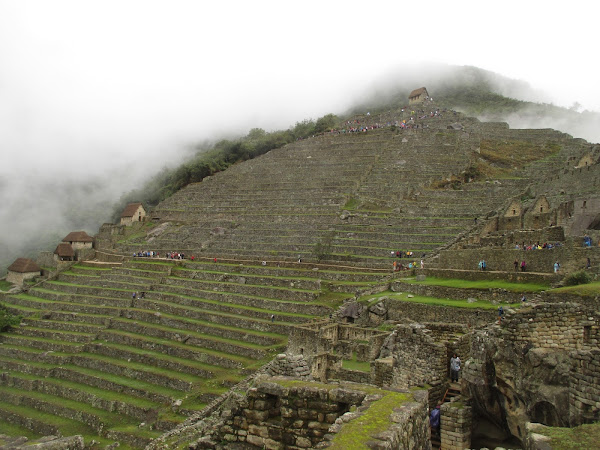 This is possibly the most famous view of Machu Picchu: a multitude of tiers cut into the side of the mountain. They did this for farming! Also note that some of the buildings on the left have thatch roofs added to show what they would've looked like back in the day. 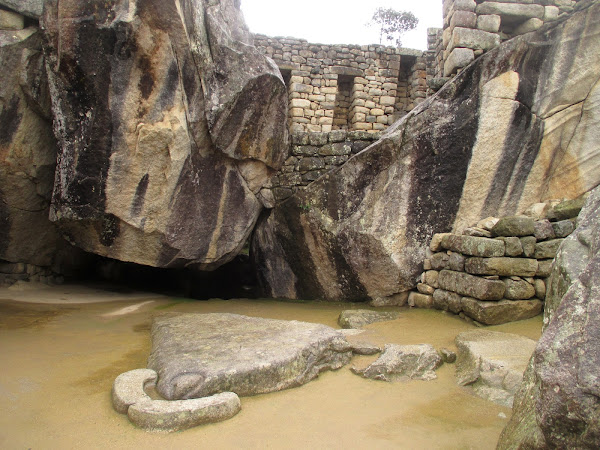 The Temple of the Condor. I thought this was the most interesting temple. The triangular stone on the ground is the beak, and the rocks angling out diagonally from behind it are the wings. See it?

After a long day of touring the park started emptying out. Of course the rain had stopped and the fog had lifted now that we had to leave. But braving the weather had been worth it.

I took one last look at the mountains around us and descended back into the present. 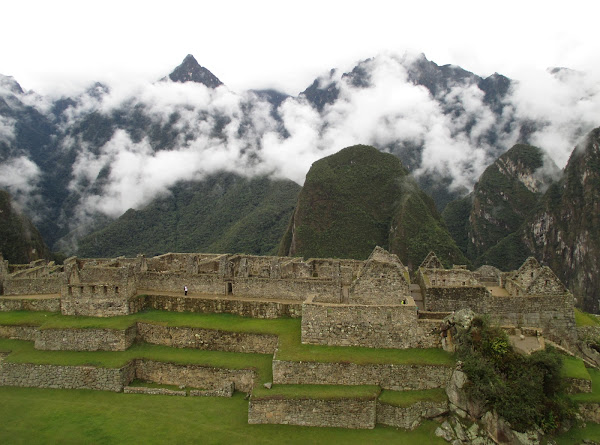 Blue mountains everywhere around us.