Welcome to the Jungle

As I described in more poetry in my previous post, Monica and I flew through El Salvador to Peru to start our honeymoon. We had a second layover in Lima that resulted in the most emotionally fraught airline experience of my life: despite booking our tickets months in advance, we had been moved off our flight for no discernible reason. It mattered way more than usual because the hotel at our destination would not pick anyone up if they arrived later than noon local time - getting down the Amazon river at night was simply too dangerous. So what might seem like a delay of only an hour or two to get us on the next flight would actually result in an entire day lost. We spent hours at the airport talking to a dozen customer service representatives as the clock was ticking down and not a single one could help us or even give an explanation for why we were the ones that got moved while a hundred other people didn't have their plans mysteriously changed. It was a truly awful way to begin the vacation, and I will never forgive LAN Airlines (now LATAM) for the distress they put us through.

We waited standby for our original flight (where we had selected our seats months earlier!) and through shear luck, exactly two people did not make the boarding call and we were allowed on. I resented every other person on that flight. Why were they better than me? Did they pay more for their tickets? Were they all loyalty members? I couldn't find any logical explanation.

We landed in Iquitos - a city with a dangerous reputation - frayed and on edge. I was paranoid someone on the ground would try scamming us, so when I finally found our uniformed, English-speaking tour guide it was a huge relief.

During the two hour drive to the river docks in Nauta we stopped once for a local snack, which largely amounted to rice and plantains wrapped in a tortilla-analogue. After precariously loading up our luggage and stumbling onto the tiny boat - which was really only a canoe with a shallow motor - we were on our way down the Amazon River. 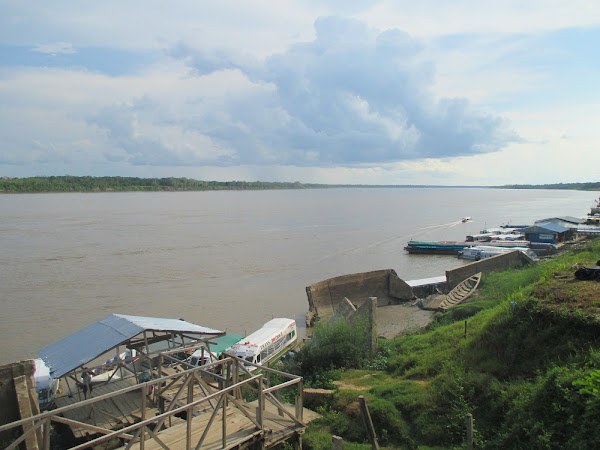 The Amazon River docks at Nauta. It's a big, brown river.

The sun started setting while we were still on the boat an hour later, which was all the evidence I needed for the strict airport pickup deadline. We threaded through the last of the narrow forks only with the help of flashlights. I'm glad our guides knew where they were going. 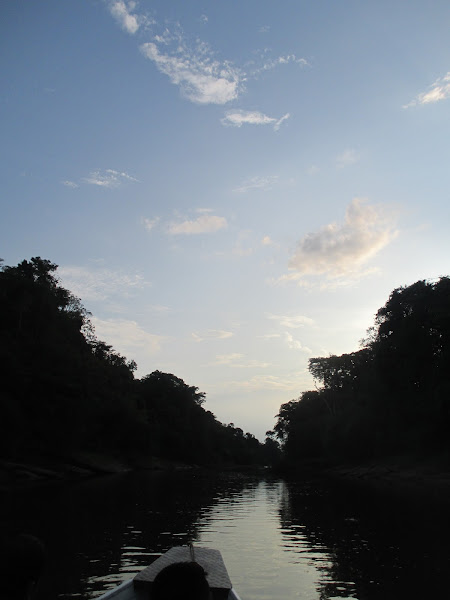 Amazon River fork at night. Notice how light the sky is in comparison to the river. I didn't modify the brightness or contrast at all - that's how it really looked.

We were greeted with a passion fruit drink and a heavy snack consisting of beef mixed into rice. This was an example of what we'd be consuming during our stay: lots of juices of all types, including melon and pineapple, accompanied by rice with bits of protein hidden inside. After ensuring we had enough to eat, we were promptly shown to our room where we could rest after a full day of travel.

Of course, the room itself offered no respite. The humidity ensured I was uncomfortable. The mosquito netting made getting in and out of bed a clumsy chore. And the sounds. I can't describe the sounds adequately. Despite being exhausted physically and mentally, I couldn't sleep. Being in the canopy made the jungle come alive around us in a myriad of frightening ways. I could hear numerous primates howling, something like a bullfrog croaking, and at one point what must have been a large cat roaring. Then the monkeys started throwing things at us. I heard impacts on the roof regularly until sunrise. I'm not certain I slept at all any night I was there. 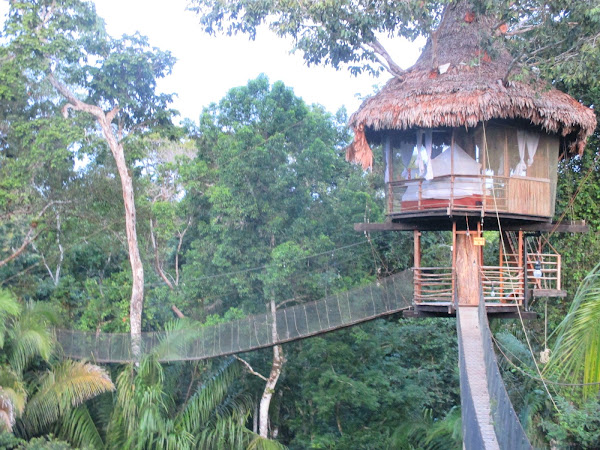 A treehouse hotel room. No windows. No walls. No AC. Power only during the day. Limited plumbing.

The jungle was much less daunting in the morning. climbed down to the lodge and I asked our guide about the monkeys throwing things at us. He assured me I wasn't hallucinating: "They don't think we should be here." No kidding. 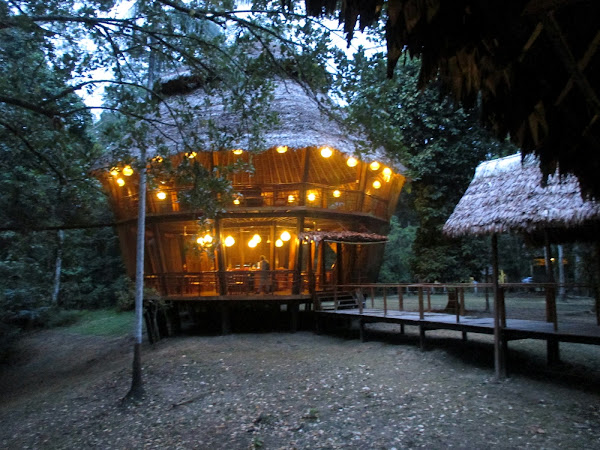 The Treehouse Lodge. This is the one communal building where all the meetings and meals took place.

We spent the day exploring. It included tours up and down the river forks - there were a lot of birds of various species that weren't afraid of us. And there were occasionally monkeys competing for space on the branches. 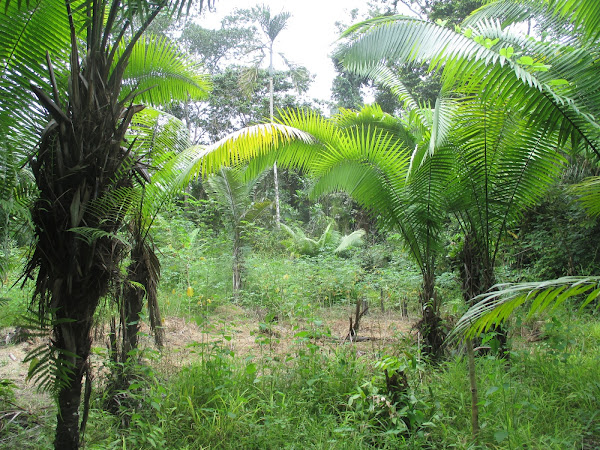 The Amazon Rainforest. This represents what an average view of it looks like from the inside. I did not modify the saturation or colors here - it's really that green and bright. There are sections of variability - huge trees or termite mounds - but this is mostly what it looked like during the day.

We took a night hike into the jungle and it was terrifying. There are more species of spiders and grotesque insects that come out at night there than I ever imagined possible. Most of them were deadly, and our guide took a particular kind of glee in pointing them out to us. The mushrooms were equally fascinating and deadly: some looked almost crystalline, others utterly alien, and some even glowed in the dark.

When we returned we noticed bats hanging right above our heads in the one covered hallway the lodge had. They didn't bother us, and we didn't bother them. We were in for more of a shock when a tarantula blocked our path just a few feet from our room. The walkway was barely over a foot wide there, so we would have to step over the big, furry spider. Coincidentally, only a few minutes earlier our guide had described in great, gruesome detail how tarantulas could fling their poisonous needle-like hair over distances to impale a perceived threat. I looked it up later, and he was telling the truth. With a short jump we made it past the beast and won the day. It's a battle I'll never forget.

The next morning we went fishing. For piranhas. Their jaws and teeth are terrifying up close. The preferred bait is raw beef - most of the time it's gnawed off the hook the instant after you've finished casting. Combined with how murky the water is - you can't see below the surface - it made the river all the more menacing.

The good news is that I caught a catfish. And then the lodge gutted and cooked the fiends for us to consume. 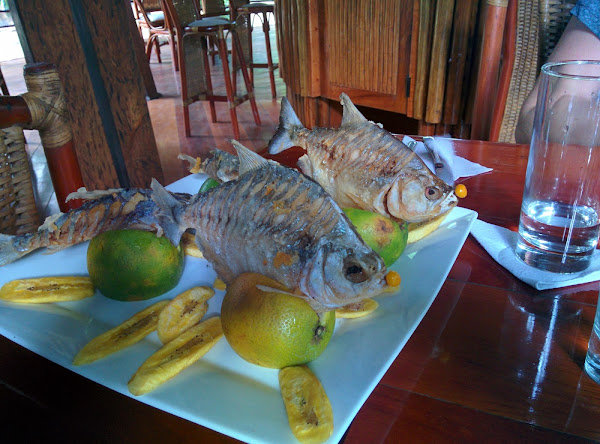 Fresh caught piranhas (plus catfish in the back!).

In the afternoon we visited a local village. It was a sad scene. The children were unattended, mostly crammed around a ten inch TV screen watching Chuck Norris VHS tapes. The largest building in town was the abandoned wood slat church/school, fallen into disrepair, a high water mark from flooding evident along its side.

Inside the house of the self-styled mayor, we met a sloth named Pablo. He took to both us immediately, literally. While his claws are not painful they're also not pleasant. We watched him slowly meander around the room. His movements might have been sluggish, but they were always sure. 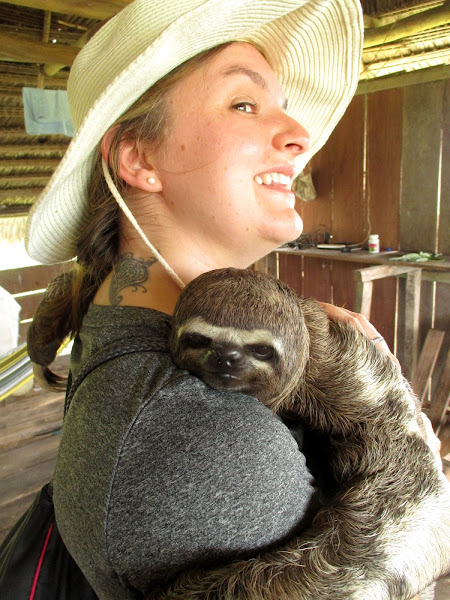 We purposefully stayed out on the river through dusk. It meant fighting off more mosquitos, but it allowed us to see pink river dolphins jumping and splashing around. While we watched, our guide tried to convince us of the health benefits of the drug ayahuasca and told us the myths of the giant snake Yacumama. We briefly went ashore on a large sand dune, complete with gulls and eggs and all manner of mysteries. It was a stark gray to the jungle's constant green. 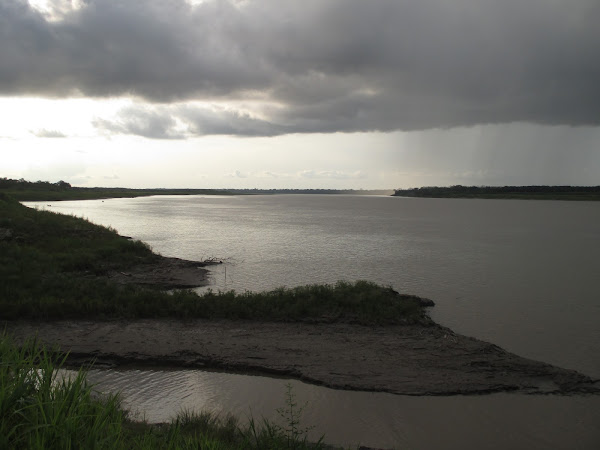 The Amazon river can get desaturated when there's rain and clouds and the tide exposes some sand.

We watched the sun set in tones of equatorial blue, a day of travel back to civilization looming before us. 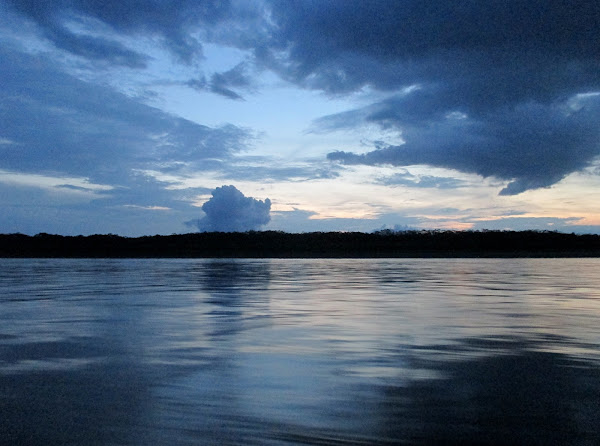 The Amazon river at sunset.