How Game of Thrones Is Really Going to End

I first picked up A Game of Thrones based on its striking, snowy cover while lazily perusing a bookstore by myself twenty years ago. I had gotten up to date with another epic fantasy series, The Wheel of Time, and was looking for something similar.

I was in for a big surprise.

Now two decades later, the book has spawned a show that has captured the imaginations of a much wider audience, and is also more up to date than the source material. Despite starting with the book, this fact makes me quite happy, because if we didn't have the show right now we might be feeling a lot like fans of The Dark Tower when Stephen King got hit by that van.

Instead of never knowing if we'll get an ending, we know that the story is being finished under full creative control in two more compressed seasons, with season seven bearing down upon us right now. It returns in exactly one week.

I'm assuming if you're reading this that you're all caught up, but if you're not, fair warning: SPOILERS AHEAD. And if you'd rather not read speculation about the finale then you should move along too.

Let's start super basic. The name of the book series is A Song of Ice and Fire. And if two characters were two embody those two elements, who would they be?

There's one main character who has spent the vast majority of his time in cold places, mostly on or under a giant wall of ice. He has fought enemies that shatter into chunks of ice when killed. His family comes from the North, and his last name is literally a state of matter that is a form of ice. Yeah, Jon Snow is Ice.

There's also a main character who hangs out in deserts, and has been consumed by a blazing inferno only to survive without a scratch. Twice. She is also the only mother and rider of fire-breathing dragons in the world right now. Finally, she has the support of a god who likes his sacrifices nice and crispy, and whose icon is a flaming sword. So, Daenerys Targaryen is Fire.

One has spent the entire series in the West, one in the East. One is female, one male. One has jet black hair, the other platinum white. There is definitely a yin-yang balance thing going on here. Plus they're both young, attractive, and single (there's a reason the writers forced that awkward break up with Daario at the end of last season). Not to mention the fact that these two are related (technically she's his aunt), which is something the Targaryen dynasty has always seen as a good sign when matchmaking.

The inevitable conclusion is that these two are headed straight for each other.

This isn't a novel idea or anything revolutionary. You can find speculation on it over a decade old at this point. Bare with me. We're building up to something.

The current macro situation is poised for an explosive couple of seasons. Westeros in the south is pretty much every noble family except the Lannisters (and maybe even some of them) eagerly planning for a power change in the existing regime. Add to that a massive army - dragons included - headed straight for them. Meanwhile, in the North the White Walkers keep bolstering their numbers, while the human forces continue to dwindle.

Let's extrapolate. Dany plus allies retake the throne and oust Cersei, who will almost certainly not survive to see the end. At the same time, Jon and his forces are pushed harder and harder into ever more dire circumstances. Possibly they have to retreat far south of The Wall, to someplace like Winterfell, although my money's on Moat Cailin because it's the transition between the North and the South (so, symbolic) and because it's also the thinnest piece of land on the whole continent. Wherever the ultimate battle happens, when all hope seems lost and the White Walkers are on the high ground about to push past the last line of defense, that's when the dragons swoop in and all Seven Kingdoms come rushing onto the field to push back the blight. Some kind of magic might get done to end the curse of the White Walkers forever and then BAM, the series is over.

But that can't be all. GoT's showrunners have consistently put the climactic episodes in slot nine of their ten episode seasons. There's no reason to think the true ending will be any different. If a season needs a denouement, how much more an entire series?

I think the final hour of the show is going to be concerned with seeing our favorite characters off. Bran will probably be dead because his only worth to the overall plot at this point is the information he has on Jon's parentage and how the White Walkers were created - and we saw what happened to Rickon when the writers had no use for him. Although, now that I think about it, Meera Reed has all the same information, so maybe Bran will be killed off even sooner just to surprise and depress us.

Beyond that I think guessing about characters is probably a crapshoot. But what about the world as a whole? Dany and Jon live happily ever after as queen and king?

No. A thousand times no.

This isn't that kind of story. It would be a nice twist for things to actually go well. There'd be a funny irony to that. But I think the final twist most people won't see coming is actually political. And it will take place after the last soldier has laid down their arms.

Let's go back to episode eight of season five, "Hardhome." Dany and Tyrion are talking families, politics, and the future. 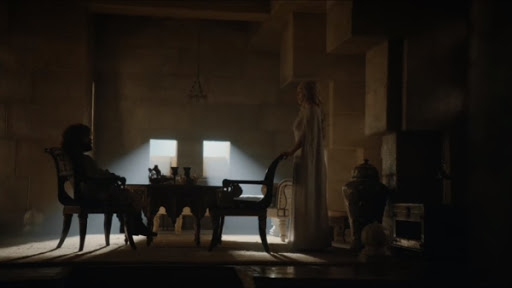 The whole scene is excellent, but I'm going to transcribe the most relevant part, right after Daenarys points out that her entire raison d'etre is eliminating slavery so that the average person can live free:

TYRION: When you get back to your home, who supports you?

TYRION: Let's be generous and assume that's going to happen. Here in The Slaver's Bay you had the support of the common people, and only the common people. What was that like, ruling without the rich? House Targaryen is gone. Not a single person who shares your blood is alive to support you. The Starks are gone as well. Our two terrible fathers saw to that. The remaining members of House Lannister will never back you, not ever. Stannis Baratheon won't back you either. His entire claim to the throne rests on the illegitimacy of yours. That leaves the Tyrells. Not impossible. Not enough.

DAENERYS: Lannister, Targaryen, Baratheon, Stark, Tyrell - they're all just spokes on a wheel. This one's on top, then that one's on top, and on and on it spins, crushing those on the ground.

TYRION: It's a beautiful dream: stopping the wheel. You're not the first person who's ever dreamt it.

DAENERYS: I'm not going to stop the wheel. I'm going to break the wheel.

Tyrion thinks Dany is referring to creating a dynasty: one family line that reigns forever. She is not. Her character has been startlingly consistent: she has upheaved the status quo for governments and economies in every single place she's ruled. Westeros will suffer the same fate.

I think she'll win the battle against the Lannisters and take the crown. But I also think that it's a temporary solution until all the other threats to the Seven Kingdoms are eliminated. Once that's done, her final plan will come to fruition.

That's going to be the big twist at the end of season eight. How do you break a wheel of families squabbling for power? How do you win with only the support of the common people? You eliminate the throne itself.

There's precedence for this within the lore and evidence without. Within, we have only to look at some of the Free Cities as examples of at least semi-democracies or republics. Without, we know that none of the spinoff shows in development take place after the conclusion of Game of Thrones. That implies that the world is going to be much less interesting - imagine this show without the noble families competing with each other for power. Boring! We also know that George R. R. Martin based a lot of his story on actual European history, but he's still fundamentally an American. I think he'd want to write his own country in somewhere. It'd be fitting and poetic to put a revolution at the very end.

That's my theory. Take it or leave it. Feel free to disagree. But if I'm right, then the show may end not with Queen Daenarys, but President Daenarys instead.