I have about a dozen game reviews to catch up on, so I decided to start at the beginning, which is this past April when I beat Lego Star Wars. It's an engaging, but fairly easy game to go through and conquer, and the bulk of the game is definitely fun. 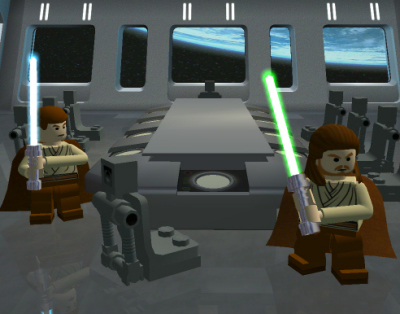 The really great part about the game is the matching up of these two licenses. The engine is almost entirely made up of Lego pieces, while the story is a clone of the three newest Star Wars movies (Phantom Menace through Revenge of the Sith). However, the story is conveyed without any dialogue, relying rather on things like facial expressions, gestures, music, and occasional sound effects. It is quite well done, and very humorous at points.

The bad thing is that after a single play through you'll really have no reason to pick up the game again. Even part of the way through the game I felt like I could no longer see the point of continuing. There are some extras hidden throughout the game, but they're fairly easy to find, and most of the rewards are merely cosmetic. The game is also too easy, which is probably a result of its target market being at least a decade younger than I am. Finally, the controls were awful on the PC. The game did not take advantage of the mouse and relied on both your hands being cramped on the keyboard. Because of that, I would recommend playing this game on a console if you have the choice, but I would only rent this game, or get it for a younger gamer.

Why were you playing Lego Star Wars in the first place?

I downloaded the demo because I was curious, and it made the game seem really fun. Demos can do that.